Whether your small business is operating completely 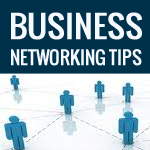 online or you have a physical store or business
open in the “real” world, a majority of your
networking activities are going to at least start online,
because that is the reality of today’s business world.

Networking is a must if you plan on expanding your business
and making it a success. Garnering contacts within your market
that can further develop your business and increase its reach
is an absolute necessity. While quality network can
help your business greatly, networking sloppily and ineffectively can hurt
you just as much. Here are five very common and crucial mistakes that
business owners need to avoid when beginning to network online.

Confusing networking with selling
It is absolutely crucial to remember that networking and selling is not the same thing.
Sure, networking can eventually lead to sales, but selling your wares or services is not
the immediate goal of networking. You are looking to establish a relationship that
could eventually lead to monetary gain, not the other way around.

When you are networking, you should be trying to establish a relationship that
is helpful to both parties involved. If you are doing nothing more than pitching
your product or services, it becomes clear immediately that your intentions are
selfish and it, more often than not, comes off as if you are trying to get something
without offering anything in return.

Talking about yourself too much
Networking is always a two-way street – it’s not a forum for praising yourself and taking control of the conversion. When you are talking to someone you would like to establish a business relationship with, be sure to show interest in them as well. Of course, you want to let them know about what it is that you are doing, but you also want to offer them a chance to talk about themselves too. Hogging the conversation and focusing on yourself will not give off the impression that you are truly interested in cooperating. Takes some time to let the other party talk about what they do and show them that you are interested in more than just promoting yourself.

Forgetting to follow up
If you have already established a contact, you need to continuously follow up and keep in touch with that contact so that it remains a successful networking relationship. Send emails to your contacts regularly to check up on them and engage them in friendly conversations even when you do not need anything from them and you don’t have anything business-related to discuss. Remember also that overdoing it can be just as bad as never following up. It is important to find a middle ground where you are talking to these people regularly and meaningfully but not spamming them with requests and pointless chatter every day.

Spreading yourself too thin
It is important to treat every networking contact with respect and to try and establish a smaller number of quality relationships rather than accumulating too many contacts and not following through with any of them effectively. Less is more when it comes to networking, especially if your business is small and you do not have enough workers at your disposal for maintaining quality networking contacts with a huge address book of people. Pick and choose your contacts wisely and try to focus on establishing a small core of quality contacts instead of a large list of people you have flimsy relationships with and can’t keep up with on a regular basis.

Abusing your networking relationships
This last mistake should go without saying, but it is so important that it should be mentioned either way. An example of abusing your networking relationships would be signing them up to newsletters or chain mails without their approval, spamming them with impersonal promotional emails endlessly or even worse, giving their emails and contact information to others in return for money or any other services. These types of practices will earn you a reputation as an untrustworthy business person and as someone that everyone will want to avoid. Do not waste all of the hard work you have put into establishing these networking relationships with such practices. If you want to put these people on your mailing lists or introduce them to other people within your network, make sure that you receive their approval for doing so first.

This is a Guest post from:
David Lazar is a regular blogger at PDF Converter blog. With a background in journalism,
he specializes in writing blogs on a variety of topics, including freelancing, careers, finance