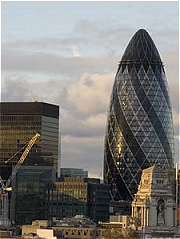 city that is generating fervor of interest among-st the major players
in the technological industry.

With a fresh focus on innovation and new ideas, smaller businesses
and entrepreneurs are being given the chance to push their way to
the front and grab the attentions of investors and
larger organisations from around the world.

Increased interest from the tech industry

In past years London has seen a few organisations from
the field of technology place their roots down in the city
but in recent years there has been a rapid increase in the
number of businesses that are interested in setting up a base in the capital.

Tech city, with its origins in East London, is spreading right the way through the city and is
causing quite a boom in the technology industry. This is good news for the economy but even
better news for those who are starting out as smaller operations looking for an opportunity to grow.

The importance of government support in helping small businesses grow

Government support is having a rather large impact on the growth of the tech city as it lends a hand to new businesses to build their connections and generate contacts in the larger more established technology-based firms. Having these kinds of contacts is incredibly beneficial for any business looking to start up and hit the ground running.

Support has also come in the form of resource provisions. The UK Tech and Investment Organisation is set up to help smaller businesses and entrepreneurs generate the resources they need to put their products in the limelight, putting people in touch with investors and arranging events for people to share their innovations and technological developments.

Opportunities for entrepreneurs and small operations

London, as the tech city, has been renting spaces out to multiple smaller operations so that people can share the rental costs of workspaces, providing greater financial freedom to concentrate on their projects. Demo days have been set up right across the city where leading organisations in the industry are invited to attend to see the kind of talent that is out there.

Drawing attention from the technology industry

Very recently, large social networking giants and online retailers have moved to the city and set up a base. This has drawn huge amounts of attention from the industry and has added to the focus that has been put on the capital, firmly cementing London as a tech city. Seeing such large and successful organisations relocate and set up in the area has given the notion of labelling London as a tech city even greater credibility.

The impact of the tech city on the technology industry

It seems that with a combination of government support, interest from investors, and the relocation of social networking and online retail giants to the city, smaller businesses have a greater opportunity than ever to make a mark on technological development. It will be interesting to see how this shapes the innovations we will see over the coming year and what new products this will bring to our shelves. It is undoubtedly going to benefit the industry both in this country and overseas as more and more organisations flock to the capital to see what the tech city has to offer.