The desire to work from home is not new 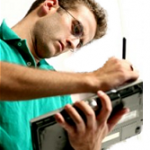 and has long been discussed as a way
forward for businesses.

In recent times the following has become evident
In the last twenty years the possibility of having a mobile workforce able to work from remote locations or from home has become a reality.  Although we are now aware of environmental issues that affect a workforce, the possibility of working from home has been traditionally discussed in terms of improving the work-life balance
by cutting down on commuting time and allowing people to spend more time at home.

Improving job satisfaction and staff morale were the primary focus behind providing
people with the opportunity to work more flexible,
although we now know of other benefits too.

In recent surveys the following was discovered:
A majority of employee’s value mobility more than a higher salary.

A reduced impact on the environment
Less time spent commuting does not just mean that people get to spend less time at work and travelling, but it also means that there is less impact on the environment. In today’s world it is important for a business to be seen as environmentally conscious and allowing your workforce to work from home will mean a less substantial carbon footprint. There are other advantages too, because businesses do not need to invest so much in their infrastructure as people do not require the same amount of office space. This frees up a considerable amount of cash that can then be invested elsewhere.

How the idea of mobile working has developed

The initial concept of mobile working referred to the notion of an actual office set up in the home with all of the hardware that went with it. The need for such large and bulky hardware has all but disappeared with the technological advancements we have seen over the last twenty years. People only need a mobile device and access to their organisations databases. This can be done from anywhere, not just the office at home. The idea of mobile working has expanded from a relatively primitive concept to a much more flexible and free way of working.

Interesting statistic:  3 our 5 workers say they don’t need to be in the office anymore to be productive

One of the biggest problems that mobile working seems to have presented is the issue of trust. How does a boss know that an employee is working as they should be and putting the hours in. Ultimately this takes trust and confidence, which not many business owners and managers can say they have. This related to the traditional concept of remuneration though, where an employee works a set number of hours and is paid accordingly. Perhaps a newer understanding needs to be developed, however, where employees are compensated for the objectives that they achieve, rather than the number of hours they have spent achieving it. Performance-related pay would suit a mobile way of working far more so.

So what does all of this mean for your business?
Everybody knows that every business owner these days should be striving to reduce costs and increase
workforce productivity especially in these challenging times. Therefore embracing the concept of a mobile workforce is then more of a necessity than a fad or short trend.